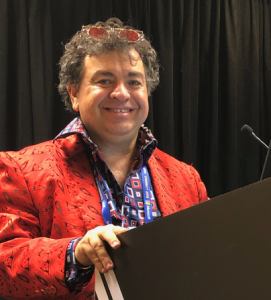 VP Broadcasting and Technical Supervisor
For over 35 years, Eric brings his expertise in News, Sports, and Production. After being an award-winning cameraman, he switched to being a Technical Supervisor for Network Television Shows and a Broadcast System Designer and Engineer. As a Technical Supervisor, he has designed and built Olympic event camera systems, over 100 Reality Shows, News and Interview setups, specialty sports camera design and operational systems, as well as, many permanent and portable specialized camera systems. Eric has managed and scheduled hundreds of crew members for all the shows that were responsible for set up, shoot and wrap of large multi-cam field shows in an eight-hour day and build fully functioning studio systems in record time, including full testing and training. He has won multiple awards as a director of photography and product development. Eric has been a product/software tester and evaluator. His television, 3D, and specialty camera systems have taken him to numerous countries worldwide. Eric’s production philosophy is that he can make any show work in the fastest and most cost-effective way possible.
Facebook Twitter Google-plus Linkedin

The Ultimate Esports, VR & Robotics mobile venue serving the collegiate and amateur markets to compete, develop advancement, and to have fun!